The Touching Reunion story of LION


God PUT an unimaginable INSTINCT to animals only for us to realize that even animals we're made for our OWN comfort and company. I hope this video lets us touch our souls to have more compassionate heart and mind as well. You must watch this video. Amazingly beautiful story. The childlike joy on the men's faces is a sight to behold and a reminder of how great life can be. An Amazing Love Story: Christian the Lion I had to make this post, because this story is incredible. I've been a big fan of the wonderful movie "Born Free" since I was a child, so I'm surprised I've never heard this story before. 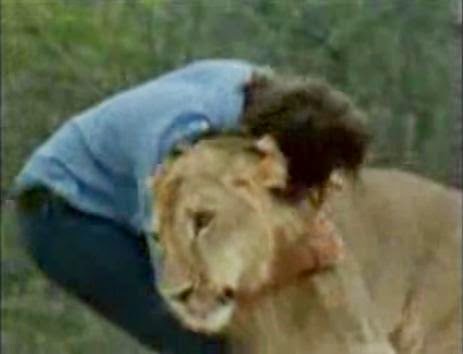 In 1969, a couple of Australian guys named Anthony "Ace" Bourke (erroneously reported as "Berg") and John Rendall adopted a lion cub they named "Christian," who eventually became too big for them to keep. By chance, the stars of "Born Free" walked into the shop where Christian lived and suggested Ace and John send the lion to Africa to stay with the famous George Adamson, the real lion conservator behind the film. After a year, Ace and John wanted to see Christian again, but they were told by Adamson that no one had seen the lion in nine months. The blokes decided to go anyway, so George told them it was unlikely Christian would recognize them even if they could find him. When they arrived, the two fellows were informed that Christian had mysteriously shown up the day before, as if he knew they were coming! They went out to see him