Sachin about Greg chappel in Playing It My Way book 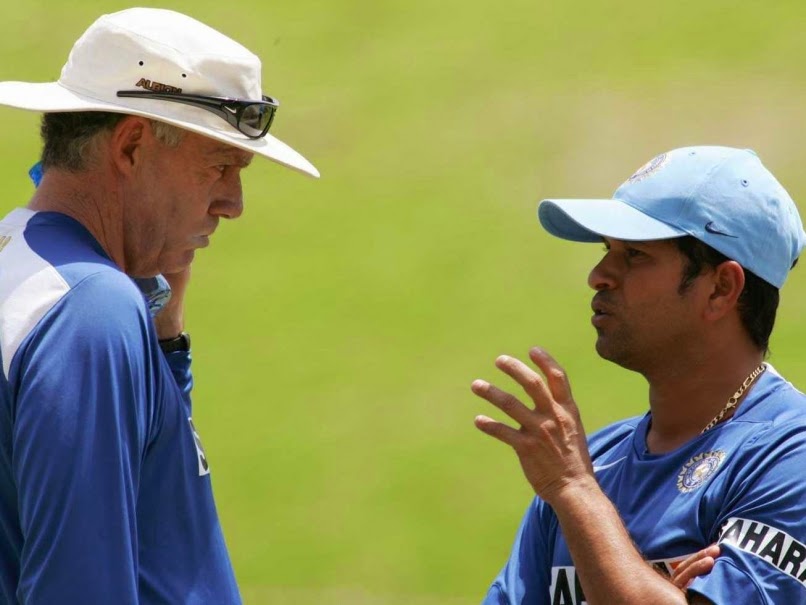 Sachin Tendulkar has alleged that Greg Chappell, who was India's coach between 2005 and 2007, suggested that he take over the captaincy from Rahul Dravid months before the 2007 World Cup in the West Indies.

"Just months before the World Cup, Chappell had come to see me at home and, to my dismay, suggested that I should take over the captaincy from Rahul Dravid," Tendulkar writes in his autobiography Playing It My Way, which will be released on November 6. "Anjali [Tendulkar's wife], who was sitting with me, was equally shocked to hear him say that 'together, we could control Indian cricket for years', and that he would help me in taking over the reins of the side.

"I was surprised to hear the coach not showing the slightest amount of respect for the captain, with cricket's biggest tournament just months away. He stayed for a couple of hours, trying to convince me, before finally leaving."

Tendulkar is scathing in his criticism of Chappell, describing him as a "ringmaster who imposed his ideas on the players without showing any signs of being concerned about whether they felt comfortable or not".

"I suggested to the BCCI that the best option would be to keep Greg back in India and not send him with the team to the World Cup. That is not what happened, of course, and the 2007 campaign ended in disaster."

India were eliminated in the group stage of that World Cup, after losing games to Bangladesh and Sri Lanka. "I don't think I would be far off the mark if I said that most of us felt that Indian cricket was going nowhere under Chappell."

Tendulkar writes that several senior players were relieved to see Chappell go, "which was hardly surprising because, for reasons hard to comprehend, he had not treated them fairly".

He also terms Chappell's attitude towards Sourav Ganguly as "astonishing". "Chappell is on record as saying that he may have got the job because of Sourav but that did not mean he was going to do favours to Sourav for the rest of his life. Frankly, Sourav is one of the best cricketers India has produced and he did not need favours from Chappell to be part of the team".

Tendulkar also says that Chappell wanted to drop more senior players from the team. "Chappell seemed intent on dropping all the older players and in the process damaged the harmony of the side. On one occasion, he asked VVS Laxman to consider opening the batting. Laxman politely turned him down, saying he had tried opening in the first half of his career because he was confused, but now he was settled in the middle order and Greg should consider him as a middle-order batsman.

"Greg's response stunned us all. He told Laxman he should be careful, because making a comeback at 32 might not be easy. In fact, I later found out that Greg had spoken to the BCCI about the need to remove the senior players, no doubt hoping to refresh the team."

Tendulkar also writes that Chappell had a tendency to take the limelight when India played well, but not otherwise. "I also remember that every time India won, Greg could be seen leading the team to the hotel or into the team bus, but every time India lost he would thrust the players in front. In general John and Gary always preferred to stay in the background, but Greg liked to be prominent in the media."

Tendulkar revealed how disappointed the players were after the shock first round exit during the 2007 World Cup and how he was hurt when people questioned the commitment of the Indian players. "After we returned to India, the media followed me back home and it hurt when I heard my own people doubting the commitment of the players. The media had every right to criticise us for failing, but to say we were not focused on the job was not fair.

"We had failed to fulfill the expectations of the fans, but that did not mean we should be labeled traitors. At times the reaction was surprisingly hostile and some of the players were worried about their safety. Headlines like 'Endulkar' hurt deeply. After eighteen years in international cricket, it was tough to see things come to this and retirement crossed my mind. My family and friends like Sanjay Nayak did all they could to cheer me up and after a week I decided to do something about it. I started to do some running, to try to sweat the World Cup out of my head."
at 9:27 PM

Email ThisBlogThis!Share to TwitterShare to FacebookShare to Pinterest
Labels: politics