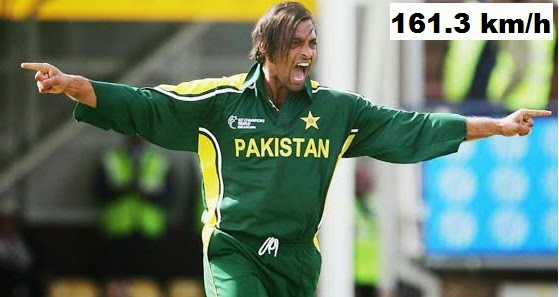 1. Shoaib Akhtar  The fastest ever bowler in cricket history Shoaib Akhtar recorded 161.3 km/hr against England in the 2003 World Cup. Known for his performances against India during the 1999 ICC World Cup, Akhtar is also popularly known as the 'Rawalpindi Express' for his ability to consistently bowl at speeds touching 100 mph. He was first bowler to reach 100mph and has bowled at speeds of 160km/hr, 159km/hr and 158.4km/hr.


2. Brett Lee  Lee was not only one of the fastest pacers but also could chip in with his fair share of runs for Australia in his pomp. His fastest ever balll was recorded at 161.8km/ph, but it was an unofficial game not recognised by the ICC. He bowled his fastest delivery of 160.8 kmph against New Zealand at Napier in 2005, and is the 2nd fastest bowler in the history of cricket.

3. Shaun Tait  Tait is considered one of the fastest bowlers in the world regularly reaching the 150km/hr mark. Tait had to retire from Test and ODI cricket due to recurrent injuries, and he only plays in the shortest format of the game currently, T20. The Australian bowled his fastest delivery of 160.7 kmph in a T20 international against Pakistan in 2010 at Melbourne, which is also the fastest ever delivery recorded in Australia.

4. Jeff Thompson  Jeff Thompson is regarded as one of the greatest ever Australian bowlers of all time. Thompson was one of the fastest bowlers alongside Dennis Lillee during the 70′s. The combination of Lillee and Thompson made them the fastest opening pair ever in Test cricket. Thompson is the 4th fastest bowler in cricket history and the fastest of his generation and his fastest delivery is 160.4 kmph against West Indies in Perth 1975.
5. Andy Roberts  Andy Roberts is widely regarded as one of the greatest bowlers to play the sport, and was an integral part of the West Indian team that won the World Cups in 1975 and 1979. His fastest delivery is 159.5 kph against Australia in Perth 1975.
6. Fidel Edwards  Fidel Edwards' slinging action and blistering pace made him a difficult bowler to negotiate. The West Indian has also played in the Indian Premier League with the Deccan Chargers and his fastest delivery is 157.7 kmph which came against South Africa in 2003.

7. Mohammed Sami  His fastest delivery 156.4 kmph ODI came Out at Sharjah against Zimbabwe in April 2003. Sami is an excellent bowler in the death overs and has the ability to bowl quick yorkers and swing the ball at high pace.
8. Shane Bond  Bond was the first pacer to reach the 150km/ph mark during the 2001-02 season. However, Bond recorded 156.4km/h in the 2003 ICC World Cup, and had some of the best batting lineups troubled with his venomous pace. Even India were trembling when asked to chase a relatively easy total of 146.
9. Dale Steyn  An aggressive bowler and the ability to bowl deadly reverse swing makes Dale Steyn one of the top bowlers in modern era. The number one Test bowler is placed ninth for his blistering pace of 155.7km/h against New Zealand.
10. Lasith Malinga  Malinga's slinging side arm action and his variations in pace, including the deadly slow yorker make him a tricky customer to deal with, but the Sri Lankan's greatest strength is his ability to clock high speeds touching 150 kmph consistently. He clocked his highest speed of 155.7km/h in 2011 in India.