Director/Producer-Bharat Jain
Rating: For Horror movie lovers and normal audience the rating is 4/5, Logic viewers the rating is 3/5. Finally a good try
Analysis:
This movie might be inspired by Blair Witch Project ( English) movie and Paranormal Activity. Good work in Kannada. Based on observations we can say this is not a real footage. But we should appreciate the director and actors for their flow less acting which does not give that impression. If you going to see the movie.. don't read below lines now and don't see the trailer to enjoy the movie the most. once you come back read the below observations. Some of the flaws in direction are ..

- In film they have shown this incidence happened in the forest near Mysore. They even show home stay in Mysore the troop stayed. But later Kumar says lets dont go for tracking and go to Mangalore beach to enjoy which is just 90 KM from there. How it is possible? Mysore and Mangalore are not at the distance of 90 KM. - Director wants to hide the real name of forest when they show titles. but they have shown forest department register book where Ramesh and friends register their names before entering forest. the header of book says Kukke sbramanya forest. Whether it happened near Mysore or Gundya forest near Kukke? - On first day night, camera on and off when every one is sleeping. Does Evil spirit is a techie which knows to operate camera? - Evil spirit first spoils the rewind function of camera so that they should not see their on recording. Director is smart. :) - Bag catches fire on hill top, one of them mentions there were crackers in the bag due to that bag caught fire. but if crackers were there then they should have busted. Evil put the silencer or crackers were of inferior quality :-) - when the closed container blasts the smoke will come out as if the explosive is kept inside. - Some scenes dont have Recording indicator on and time and date imprint. did Ramesh or Evil spirit siched off that mode? - Ramesh in the film used to take the Video camera always with him, why he didn't took the camera with him when Sowmya and he went to get water? Because evil wanted to capture killing of Naveen and Deepa, This Devil looks to be camera freak. But.But it missed to capture how Sowmya died, - No one took still Camera with them. Not even girls who came from Bangalore? they dont wanted to capture their trecking moments. only the Ghost was interested in leaving its footage of its presence :) - I would like to know which company battery it is which lost 3 days shooting with lights on HD camera? Or Ramesh chose to shoot only scary scenes happened with them and rest of the time switched off !!! - Prakash the survivor mentions, he returns next day night and informs forest check post. The official say they will search for them next day morning ( 2nd day) . but why they don't get these people if it was a 8 Km radious forest. All die on third day night. - At the end ghost breaks camera lens only( not the camera). as it accomplished the purpose. Just don't think all these.. go and see movie and get scared after interval. 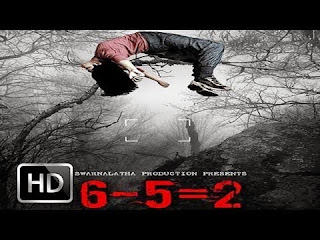